Today, Thursday, 41 years went by since the liberation of the 52 American hostages who were held in Iran for 444 days, as it is an occasion during which Algerians and Americans alike recall the prominent role of Algerian diplomacy in peacefully resolving one of the most complex crises through a “hard” mediation process, which ended with the release of the hostages.

The events date back to November 4, 1979, when nearly 9 months after the outbreak of the Iranian revolution, demonstrators supporting the revolution stormed the headquarters of the American embassy in Baghdad.

Tehran held 52 American embassy employees hostage for 444 days, in addition to confiscating thousands of documents, thus entering the US-Iranian relations into a diplomatic crisis whose repercussions are still present today.

The leaders of the Iranian revolution justified this incident as a “reaction” to the US administration allowing the ousted Shah of Iran, Muhammad Reza Pahlavi, to enter the US lands for medical purposes and granting him asylum, which provoked the revolution’s supporters who accused the United States of “planning to undermine the revolution and restore the power.”

Two days after the incident at the embassy, ​​the “Council of the Islamic Revolution” took over the rule of the country and announced its refusal to sell Iranian oil to the United States, which responded by imposing a ban on consumer goods and announced that it was freezing Iranian funds deposited in its banks.

After unsuccessful attempts by the US administration to free the hostages, the Iranian government accepted to enter into negotiations with the United States, mediated by the Algerian government, by proposing a number of conditions to free the detained diplomats, most notably: the release of Iranian funds frozen in the United States, and the abolition of American demands to obtain Compensation, the American administration stop interfering in the internal affairs of the Islamic Republic and the return of the Shah’s wealth held in American banks.

The tireless efforts made by a group of diplomats from among the best sons of Algeria, under the supervision of the late former Minister of Foreign Affairs, Mohamed Siddik Benyahia, culminated in the signing of the two sides of the crisis, the United States and Iran, on the so-called “Algeria Agreement” to resolve the hostage crisis on January 19, 1981 in Algeria and the next day, that crisis reached its final stage, as the American hostages were released in Tehran.

= US Embassy: We will always be grateful to Algeria ==

The US embassy in Algeria has, with each passing anniversary, published contributions on social media to express the country’s gratitude to Algerian diplomacy, led by former Algerian Foreign Minister Mohamed Siddik Benyahia and his fellow diplomats, for their efforts that led to the release of the 52 diplomats.

The embassy said on its official page on “Twitter”, today, Thursday, that “America is still grateful for the pivotal role played by the Algerian diplomacy in releasing 52 American hostages on this day in 1981.”

The video includes a tour inside the place that witnessed the negotiations regarding the release of the hostages inside the American embassy in Algeria, in which Benyahia participated at that time with an American official.

The director of the residence of the US embassy at the time, who was 18 years old, gave his live testimony about the negotiations that took place in 1981 between the former foreign minister and the US official.

The director of the residence conveyed a picture of the American hostages after they were transferred to the embassy, ​​and he said, “Despite the fatigue and psychological and physical exhaustion that was evident on their faces, they did not hide their joy and gratitude to Algeria for saving their lives.” 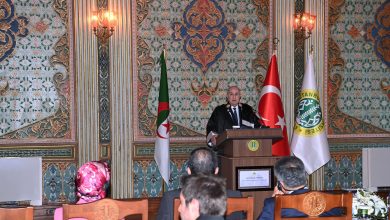