During his visit, General Said Chanegriha will hold orientation meeting with the employees of this region and inspect some industrial units of the People’s National Army.

Accompanied by the Commander of the Fifth Military Region, Major General Noureddine Hambli, Mr. chanegriha paid tribute to the soul of the heroic martyr “Zigoud Youcef” whose name is born by the headquarters of the military region, he also laid a wreath of flowers in front of the memorial and recited the opening of the holy Koran on his soul and on the souls of the righteous martyrs.

At the headquarters of the region’s command, the army General held the first orientation meeting with the executives and employees of the region, that was followed by all the members via videoconference, during which he emphasized that only the spirit of November and its firm and eternal values ​​are capable of mobilizing Algerian youth, sharpening their determination and strengthening their will and motivate them to actively contribute to building their country.

General Said Chanegriha affirmed that the President of the Republic’s support falls within the framework of consolidating the pillars that back Algeria’s security and national defense capabilities, stressing that Algeria will remain proud thanks to the patriots of its loyal sons.

President of the Republic sends a message to the Palestinian people 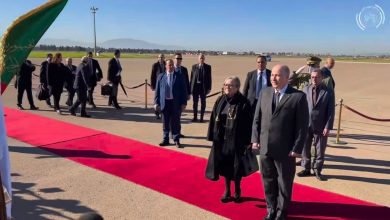