The snow that fell from Friday night to Saturday in the mountains of the province of Batna caused the disruption of traffic on some road axes in these areas, according to the Media and Communication Cell of the Local Directorate of Civil Protection.

The source indicated that the disruption concerns the “Thenia Baali” hights on the road linking the cities of Ichemloul and Aris, as well as “Thenia Rsas” on National Road No. 87, which links the cities of Batna and Thenia al-Abed.

The same source added that the elements of the secondary unit of the Civil Protection of Aris had intervened in two regions to provide a helping hand to a number of stuck vehicles due to the formation of a layer of frost and snow on the two axes.

The necessary material and human resources have been mobilized to intervene in anticipation of any emergency, according to the Civil Protection, which called on citizens, especially road users in this area, to be careful and cautious due to the formation of the layer of frost.

The residents of the area have welcomed with happiness and joy the first snowfall, which they consider a good omen after a period of drought. 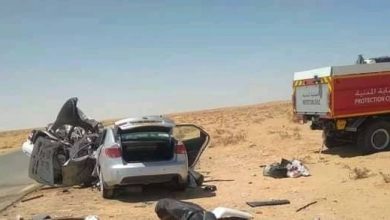