The General Manager of the National Railway Transport Company, Karim Ayache, affirmed today, Tuesday, in M’sila that the company focuses on promoting the transport of goods across the country and particularly in the Hodna region, as it is a link between the four sides of the country.

He stressed, during the open doors organized today at the University of Mohamed Boudiaf in M’sila, the importance of the transport of goods and commodities such as fuel, grains and fertilizers to support the economic revival at the national level in general and in the interior regions in particular, and to respond to the requests of public economic operators and the private sector in this field. .

Mr. Ayache recalled the role of the National Railway Transport Company in ensuring the supply of goods and commodities to the different regions of the country during the health crisis, as the company did not stop shipping goods to and from various regions of the country, which highlights the importance of the railways in the national transport system in which the various modes of transport are integrated .

The same official also highlighted that the National Railway Transport Company has prepared a plan that extends over two phases (2022-2025) and (2025-2030), which divides the railway sector into poles, the first of which is M’ssila – Tebessa, which is currently operational, while the Batna-Sidi Bel Abbas line will enter into operation ( now under construction).

He added that during these two phases, the company will develop a strategy for transporting passengers and goods in line with the size of these investments.

During this meeting marked by “highlighting the role of railway transport in local development,” Mr. Ayache also underlined that in light of controlling these needs, the National Railway Transport Company will be able to develop the necessary capabilities to ensure the transport of passengers and goods.

He also recalled that the organization of these open doors comes in anticipation of the exploitation of the M’ssila-Tissemsilt railway line through Boughzoul (Medea), which is expected to be inaugurated “next June.”

For his part, the Director General of the National Agency for Studies and Monitoring of Investment in Railways, Azzedine Fridi, announced the start of the exploitation phase “soon” of the M’ssila – Booghzoul (Medea) – Tissemsilt railway line, which will constitute an “important” economic asset to the regions of the high plateaus, pointing out that this agency ensures the good completion of projects and the implementation of the state’s program aimed at modernizing and expanding the railway transport network.

The same official also revealed a program he described as “ambitious” that will be developed in the medium term and will enable the rail transport network to expand from 4,300 km to 6,300 km and then to 12,500 km, highlighting in this regard that the railway project linking M’ssila and Tissemsilt is ready for exploitation and studies are underway regarding the completion of the two railway lines in Bou Saada (M’ssila) – Djelfa and Sour el-Ghozlan (Bouira) – Ain Hdjel (M’ssila)

He indicated that the purpose of organizing open doors on the rail transport activity is to identify the needs of this type of transport across the province of M’ssila and the other provinces of the country.

For his part, the Director of Transport of the province of M’sila, Khaled Talha, stressed that on the sidelines of these open doors, an agreement was made to use the railways to transport students within the province of M’sila and the neighboring provinces, which would reduce the pressure on bus transportation.

As for the governor of M’sila, Abdelkader Djelawi, he took this opportunity to urge railway transport officials to take advantage of the train stations of the municipalities of Barhoum, Magra and Ouled Derraj in the province of M’sila, with the aim of bringing travelers and economic operators to use this type of transport, especially the reopening of the passenger train line. (M’ssila – Algiers).

These open doors were also an opportunity to raise several concerns by economic operators, the most important of which is the need to think about building railway lines in the future which link productive economic institutions and others that distribute grains and building materials located in the two industrial areas of the Hodna region.

President of the Republic meets representatives of national community in Egypt 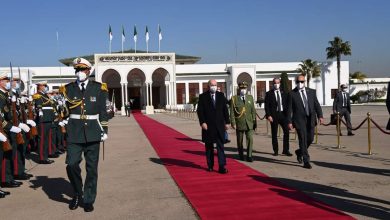