The reception ceremony began with the salutation of the national flag, and the presentation of the military salute to the guest by formations of various forces of People’s National Army.

During this meeting, which was attended by the Secretary General of the Ministry of National Defense, the commanders of the forces, heads of departments and central directors from the staff of People’s National Army and the Ministry of National Defense, as well as the Sudanese ambassador to Algeria and members of the Sudanese military delegation, the two parties touched on the regional security context, as they stressed the need to coordinate efforts in order to lift the security challenges encountered, as well as to find ways to enhance cooperation relations between the two countries, they also exchanged views on issues of common concern.

On this occasion, the General delivered his first speech welcoming the visiting delegation, stressing that this visit will undoubtedly constitute an opportunity for the two parties to exchange views on the prevailing situation in the international arena in general, and on the African continent, in particular:

“First of all, allow me to welcome you and your accompanying delegation to the headquarters of the People’s National Army, hoping that the results of your visit to Algeria will return with all the best on the path of cooperation and fraternal bonding between the armed forces of our two brotherly countries.

Also, this visit will allow us, without a doubt, to exchange views on the prevailing situation, in the international arena, in general, and on the African continent, in particular.

The Lieutenant General also affirmed his aspiration to work together to consolidate the historical relations that bind the two brotherly countries, through initiating inter-cooperation activities, which guarantees response to the requirements of the current situation in the region, and raises common security challenges:

“I assure you of our aspirations to work together to consolidate the bonds of historical relations that bind our two brotherly countries, especially by initiating inter-cooperation activities that guarantee response to the requirements of the current situation in the region, and raise the common security challenges we face.

I am also certain that the continuous exchange of visits and friction between the armed forces of both countries will increase opportunities to crystallize and define areas of bilateral cooperation, and allow it to be given the required impetus and the desired dimension.

At the end of the meeting, the two parties exchanged symbolic gifts, after which Lieutenant General Mohamed Othman Al-Hussein signed the Golden Book of Staff of the People’s National Army. 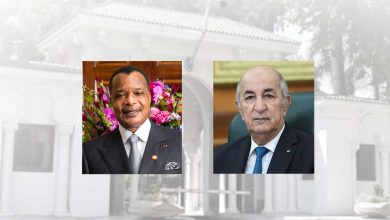