General Said Chanegriha, Chief of the Staff of the People’s National Army, received in an audience on Tuesday UK Defense Senior Advisor to the Middle East and North Africa (DSAME), Air Marshal Martin Elliot Sampson, the Ministry of National Defense said in a statement.

During this audience held at the headquarters of the ANP General Staff and attended by general officers of the Ministry of National Defence and the ANP General Staff, alongside members of the British military delegation, the two parties “reviewed the state of bilateral cooperation between the two countries and examined, together, the ways and means to further consolidate it. They also discussed the security situation at the regional and international levels,” the same source said.

After welcoming the host delegation, the Army General affirmed that “the concretization of this visit is able to allow the diversification and promotion of bilateral military cooperation”, while stating “the readiness of our country to implement practical measures aimed at achieving the expected dynamics”.

” Your visit today reflects your interest in examining ways and means to diversify and promote bilateral military cooperation,” he said.

“We would like to express our full readiness to implement practical measures to achieve the desired dynamics, based on sincere cooperation and a far-sighted, sustainable and pragmatic approach,” he added.

The Army General stressed that “it would be useful to place the dynamic of bilateral cooperation between the two parties within the framework of an approach aiming to move forward by enhancing the excellent relations that link the armies of the two countries, particularly in the field of training.

“As regards the diversification of activities relating to our bilateral cooperation, I propose to proceed, together, to the examination of the offered opportunities and the fields of their implementation, in particularly training”, the Army General continued.

In this respect, he added, “it would be useful to place this dynamic within the framework of an approach aiming to move forward by enhancing the excellent relations that exist between our two institutions, notably through the implementation of all possible means for the exchange of experiences and to widen, as much as possible, the fields of training”.

“On this occasion, I would also like to emphasise that Algeria is one of the non-aligned states and is proud of its history, made up of glories and successes.  Our country, which is committed to respecting its independence and sovereign decisions, maintains economic and military relations with many friendly countries,” he said.

The meeting was also an opportunity for the two parties to “exchange analyses and points of view on issues of common interest”, the statement said.

In this regard, the UK Defense Senior Advisor to the Middle East and North Africa’ expressed his appreciation for the objective analyses made by the Algerian side on the regional and international security situation’, while emphasising ‘his country’s readiness to further promote bilateral military relations in various fields’.

At the end of the meeting, the two parties “exchanged symbolic presents before Air Marshal Martin Elliot Sampson signed the Golden Book of the ANP Staff”. 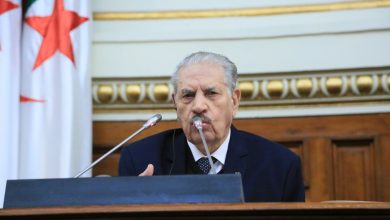