The head of the National Agency for Health Security, Professor Kamel Sanhadji, called today, Monday on citizens to be vaccinated “as soon as possible” against Covid-19 to benefit from “herd immunity” and “protection of vulnerable people” and “return to normal life.”

In a statement to the agency, Professor Sanhadji warned that “vaccination must be immediate if we are to mitigate the harmful effects of the inevitable fourth wave of this winter.”

He explained that this call for the “immediate” vaccine is due to the fact that “the effect of the vaccine is not noticed until from one month and even more after taking it,” expressing his regret at the underestimation that was recorded with the decrease in the number of infections and after the noticeable demand for vaccination during the third wave.

After stating that “coronavirus was fatal in Algeria with the development of the delta mutant, which sowed terror among the population and led to a scarcity of oxygen,” the head of the National Agency for Health Security highlighted that “the development of reliable and effective vaccines against Covid-19 is a major step in the efforts of international fight, adding that “The development of health and prevention measures and the acquisition and manufacture of vaccination in Algeria allowed the transition from a state of unmet demand to a state of satisfactory and even excess supply.”

For Professor Sanhadji, the fourth wave “will reach us relentlessly. The indicators of the new wave are present in most European countries with cases of infection on the rise again, most of them among the unvaccinated and very rare among the vaccinated people.”

He insisted on the necessity of “continuing vaccination, as well as the positive effects of the third dose of the vaccine, which would avoid the risk of the disease and reduce the number of serious cases or death.”

Prof. Sanhadji denounced “the easing of preventive measures, especially the lack of use of the vaccine, even though it is available” in Algeria, stressing that the vaccine is “a treatment category no less important than antibiotics.” “Vaccines save 2 to 3 million lives every year,” he said.

He called for “comprehensive vaccination” and “strongly” recommended a third dose to the vaccinated at least six months ago, “because after this period immunity tends to decline,” he said.

The head of the National Health Security Agency stressed that “the various actors have a preponderant role in the success of the return to normal life,” reminding health professionals who “did their best to preserve health security and the well-being of citizens,” and the media that “contribute to the dissemination and generalization of the correct scientific and medical data”, and civic education, which, by educating 10 million students, “contribute to the promotion and protection of health”, as well as the youth and sports sector and civil society associations. 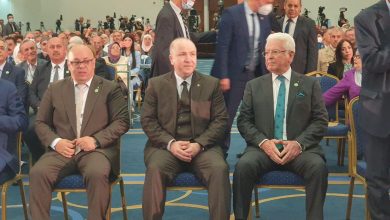