Minister of Trade Kamel Rezig called today, Saturday, on Algerian and Libyan businessmen to contribute effectively to laying sound foundations for economic integration between the two countries in accordance with the competitive capabilities and preferential advantages of each country to achieve a win-win partnership.

During his intervention on the occasion of the opening of the Algerian-Libyan Economic Forum here in Algiers, the minister considered this forum “an opportunity for economic operators in both countries to invest and launch joint projects,” adding that the private sector, which effectively contributes to growth, “may be the most appropriate engine to lay sound foundations for economic integration between Algeria and Libya”.

Rezig explained that the aim of such meetings is to “establish a true partnership that generates common wealth for growth and job creation,” and the resulting expansion in regional spaces will be a source of development in the medium and long term.

He added that the large participation of economic operators from both countries in the forum constitutes a renewed confirmation of the common awareness of the importance of the challenges facing the future of the peoples and economies of the countries of the region.

The Trade Minister stressed the importance of deepening the “distinguished political relationship with Libya” which will only be complete, he went on to say, “by including it in an integrated economic development path, especially in light of the current geopolitical circumstances.”

Trade exchanges have doubled over the past three years.

The first official in charge of trade sector in Algeria mentioned that the prospects for Algerian-Libyan commercial exchanges, which “fall within a new dynamic based on strong bilateral economic and commercial relations,” require an effective investment that includes all sectors and areas that can be exploited, including services sector such as digitization, wired and wireless communication, training and education and oil, gas and electricity services.

Rezig linked the success of this partnership with “tangible and pragmatic support” of businessmen in both Libya and Algeria, starting with the reactivation of the role of the Algerian-Libyan Joint Business Council through the institutional role of the Chamber of Commerce and Industry in both countries.

The minister affirmed, in this regard, that Libyan operators “will be welcomed by the Algerian government in order to host and facilitate their economic projects in various fields.”

He mentioned that the Algerian-Libyan economic relations have witnessed during the last three years a “significant improvement” in terms of the increase in the volume of trade exchanges, which reached 59 million US dollars during 2020, compared to 2018, where about 31 million US dollars were recorded, he considered that the volume of bilateral exchange between the two countries remains small and far from the capabilities of the two sister countries.

The Minister of Trade stressed the imperative to work with the logic of partnership and integration in various fields to face up to the current economic challenges of the two countries, indicating the role that the African Continental Free Trade Area may play in benefiting optimally from the privileges granted within this important African commercial and economic space. 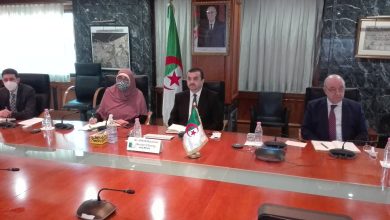 Arkab held talks with the Tunisian Minister of Industry, Energy and Mines

Minister of Trade: Mobilizing all state agencies to supportexporters.