The Minister of Water Resources and Water Security, Karim Hosni, held talks with the Hungarian Minister for Technological Innovation, Balkovic Laszlo, and the Governor of the Planet Budapest Summit and Exhibition, Estefan Jo, about the possibilities of “strengthening” cooperation between Algeria and Hungary, according to a statement issued by the Embassy of Algeria in Budapest on Thursday.

The same source indicated that these meetings took place in the presence of the Ambassador, Ali Mokrani, as part of the contusions contacts with Hungarian officials, on the sidelines of Mr. Hosni’s participation in the “Planet Budapest” summit and exhibition, accompanied by the heads of two institutions.

During his meeting with the Hungarian Minister of Technological Innovation, Mr. Hosni stressed the importance of strengthening cooperation with great added value with Hungary in this field.

The Algerian minister also evoked the increasing role of the use of technology in managing and developing the water resources sector in Algeria to meet the needs of consumers, companies and irrigation.

The same source added that the Hungarian Minister, for his part, emphasized the development of technological innovations in his country, especially in the use of new solutions based on digital applications amid the prevailing health crisis.

In this regard, the two ministers touched on the importance of technological solutions to the scarcity of water resources, due to climatic changes, the challenges and opportunities of moving towards a circular economy, the needs of prospection, managing natural and industrial hazards, improving the quality of human life, preserving the fauna and flora, preparing and completing major water installations and managing water.

In this regard, a convergence of views was recorded regarding the promotion of scientific and technological cooperation between the two countries through the development of partnerships between technological operators active in the water resources sector.

It was also mentioned that the two countries had signed memoranda in the fields of higher education and vocational training that should be used to promote technological cooperation applied to water and sustainable development.

In the same context, Mr. Hosni held talks with the Governor of the Planet Budapest Summit and Exhibition, who also holds the position of Secretary of State in charge of International Cooperation and Development at the Hungarian Ministry of Foreign Affairs and Trade.

On this occasion, Mr. Joe thanked Algeria for its participation at the ministerial level in this important event organized under the aegis of the President of the Hungarian Republic.

After congratulating his speaker on the success of this event, Mr. Hosni stressed “the importance that Algeria attaches to strengthening its economic relations with Hungary and its neighbors in Central Europe on the basis of available mutual capabilities, comparative advantages and equal interests.”

In this regard, it was agreed to jointly organize an exhibition of active institutions and research centers in the field of water resources in Algeria in 2022.

It is an economic event aimed at promoting business relations and partnerships between the economic operators of both countries.

Meanwhile, Mr. Hosni had talks with his counterparts from Egypt, Cuba and Palestine, as well as with many heads of institutions who participated in the exhibition.

The Algerian delegation participated in the conclusion of the works of “Planet Budapest” by the head of diplomacy of the host country, who thanked the participants, stressing the success of the event in terms of discussions on the common issues of water and sustainable development in the world. 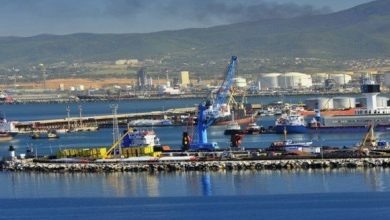