Two people were killed and 126 others were injured in various traffic accidents of varying degrees of severity, which occurred during the last 24 hours in several provinces of the country, according to a Civil Protection Services press release.

The communiqué indicated that during the last 24 hours, the Civil Protection Units carried out 107 interventions for traffic accidents that were registered across several provinces of the country, leaving two people dead and 126 others injured in various accidents. First aid was provided to the wounded at the scene of the accidents before they were transferred to local hospitals.

With regard to activities related to the prevention of the spread of the Coronavirus Covid-19, during the same period, the Civil Protection Units conducted 43 awareness-raising operations across 5 provinces and 31 municipalities for the benefit of citizens urging and reminding them of the need to respect the rules of quarantine, as well as social distancing, in addition to carrying out 36 sterilization operations across 4 provinces (20 municipalities), through public facilities and structures, especially residential complexes and streets.

According to the same source, these fires resulted in the injury of 1 person with burns in Illizi, as well as the injury of two people with breathing difficulty due to the smoke in the province of Mila, the victims were taken care of on the spot and transferred to local hospitals.

Belmahdi: Pole Mosque in Tindouf is a support for religious system of reference in the region and an openness to Africa 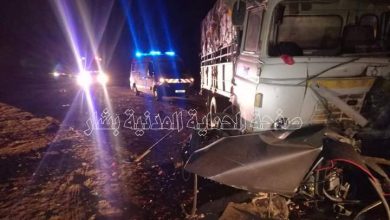 Traffic accidents: 10 people died and 129 injured in the last 24 hours

Algiers: Supply of drinking water will be cut off tomorrow, Monday, in six municipalities