The Minister of Health, Professor Abderrahmane Benbouzid, received the new Resident Coordinator of the United Nations system in Algeria, Mr. Alejandro Alvarez, accompanied by the Director of the Joint United Nations Program on HIV/AIDS, Adel Zadam, stated today, Thursday, a press release of the same ministry.

The same source confirmed that the two parties began their meeting yesterday, Wednesday, November 24, by recalling the historic and good partnership between the Ministry of Health and United Nations agencies, such as the Joint United Nations Program on HIV/AIDS, the World Health Organization, UNICEF and the United Nations Population Fund.

During this meeting, the Minister of Health “expressed his readiness to strengthen this partnership within the horizons of achieving the sustainable development goals, especially with regard to the third goal of sustainable development, which is to ensure good health and well-being for all, through universal health coverage,” praising, on the occasion, the “support” of United Nations agencies to respond to COVID-19 pandemic.

The chief sector official also stressed the importance of the United Nations accompanying the health system reform process with the aim of improving neighbourhood health within the framework of a comprehensive approach based on high-level expertise and the mobilization of additional resources.

In the near future – the same source added – discussions will be launched at the technical level, dealing with the directives of the Prime Minister? Minister of Finance, Mr. Aïmene Benabderrahmane, in the framework of organizing national health sessions, which in turn are included in the recommendations of the prospects for effective reform of the health system.

For his part, the new resident coordinator committed to mobilizing United Nations agencies to “raise the level of partnership with the Ministry of Health in order to provide the necessary support in accordance with the identified priorities, suggesting, on the occasion, to benefit from the experience of the system’s experts in the reform of the Algerian health system.”

The dialogue also dealt with “the importance of highlighting and enhancing the quality of the partnership” existing between the Ministry of Health and United Nations agencies, as well as expanding it to include other areas. 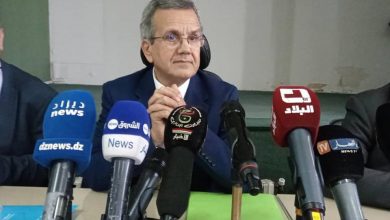